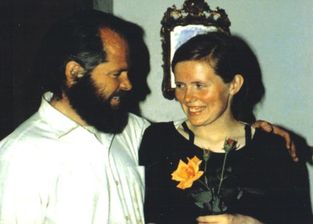 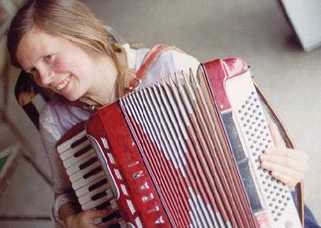 Barbara Ann was a Prom-Queen at school.
At first, Barbara was only a nanny for children but very soon she and Daniel fell in love with each other. Dan and Barbara decided that they would lead the children to the music since their early childhood. 1981 Barbara got a breast cancer. The family went back to Spain and canceled all the concerts, because they wanted to be with their mother in her last months. Paddy, which was almost 5 years old, remembers, that they had a picnic at the river each Sunday. Her last TV appearance was on video Christmas all year. She died two weeks before the video's publication. In last days were Kelly children around her bed every night. Barbara ann prepared her children on her dead. She said, that it is a part of life. On 7th November she asked her children to sing her a song, the last song. On November 1982 blew sadness over The Family in Belascoain, their moher left for a better world. Her last words were "Keep On Singing". A Spanish woman that attended at the funeral has said "As the casket was lowered into the ground the children screamed and cried hysterically, it was horrible, it was the worst experience in my life!". 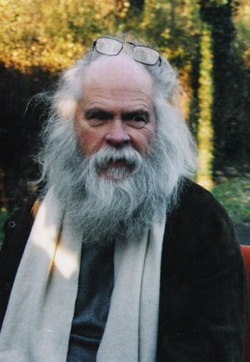 Dan studied mathematics, latin and philosophy and has been a teacher in Michigan. Also had plans become monk/priest. Dan was married two times. His first wife Joanne, whom he married in 1957. Together they have 4 children: Danny, Paul, Caroline and Kathy. In 1966 the little family moved to Spain, where Dan met Barbara, who worked as a babysitter for Dan's kids. After divorcing with Joanne, Dan and Barbara got married in 1970. Dan and Barbara Ann got 8 children. Daniel was singing with his kids and also took part in making some Kelly albums. Became a widower after Barbara's death in 1982. Got three strokes; 1990 (which paralysed the right side of his body), 1999 and 2002. The third stroke was a fatal one. 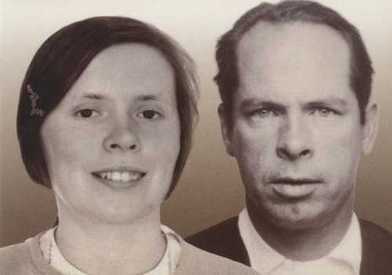 Daniel and Barbara got married on the 6th of November, 1970 in New York, USA.